Four Meeker Middle School student were chosen as winners of the Holocaust Center for Humanity’s annual writing, art, and film contest. They received hundreds of entries from across the region, including students from Kent School District at Crestwood Elementary and Meridian Middle School.

The contest is open to students in grades 5-12 from Washington, Oregon, Idaho, Montana, and Alaska. This year, students were asked to research a local holocaust survivor who has found refuge in the Pacific Northwest over the past 70 years and show how their story impacts, affects, or inspires them through a written, art, or film piece. 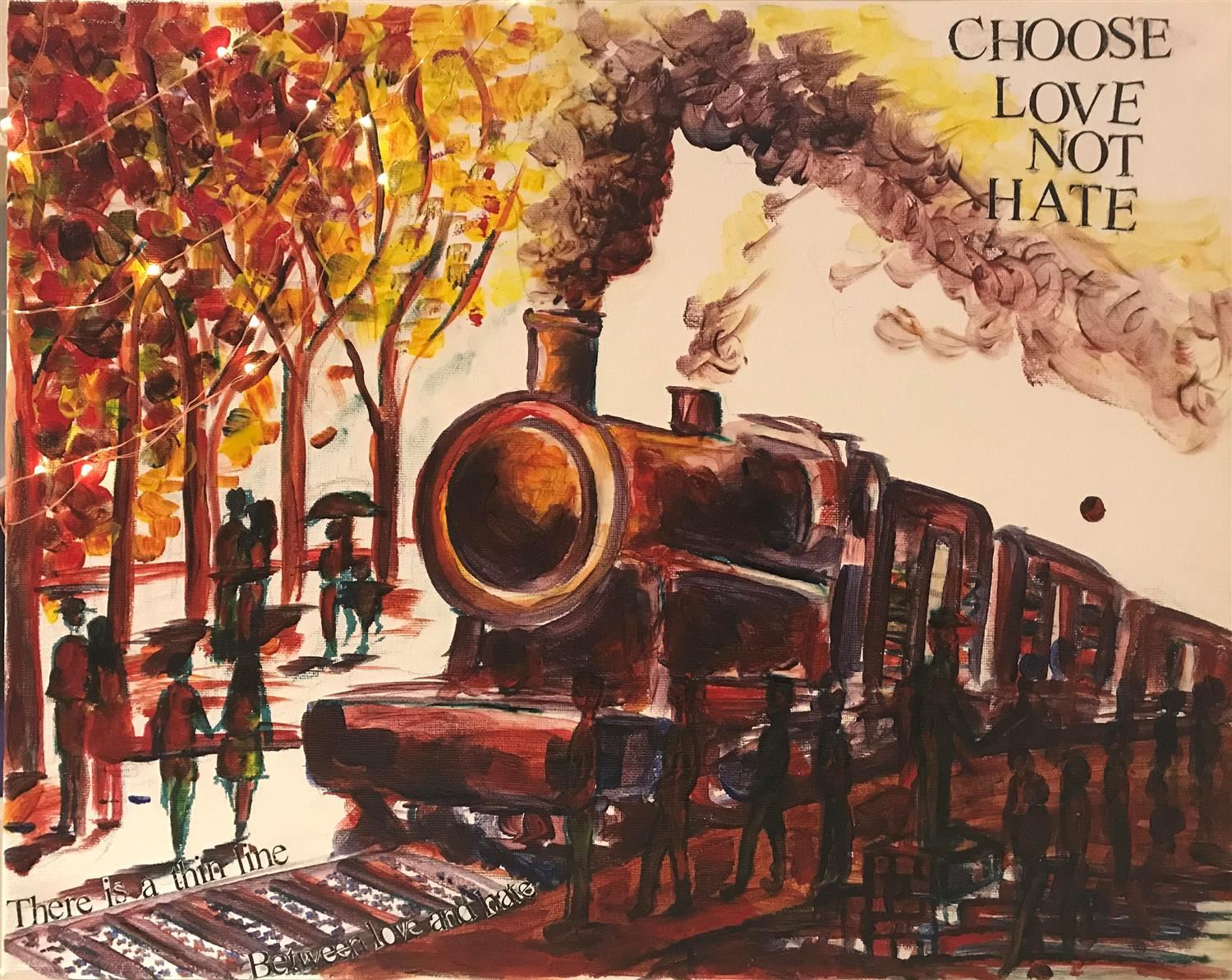 In the seventh and eighth grade art category, Rumela Weldeyesus, an eighth grade student at Meeker, earned first place with her piece that illustrates Vera Federaman’s story. Federaman was designated to be killed, but was chosen to have a chance to live and work in a camp instead.

“My art shows on the right of the train tracks rows of people coming off a cattle car and there is a person standing holding a baton like a conductor,” Rumela explained. “He is selecting people to go to the left to die or to the right to work, and people are looking hopeless and lost. On the left side of the train, however, it shows instead of this horrible, hateful environment, love: What a world would or should look like.”

“People are coming out and being embraced; people are hugging each other and seeing a different, better world in which people feel joyful. If we choose love, not hate, there should never be lines – train tracks that come between us and divide us. The thin line between love and hate should be erased for love,” she said.

“My drawing shows a blank and lifeless figure seeing their reflection, which is who they really are,” Leyna explained. “In a video of Noemi Ban, she says she saw a familiar girl but when she went closer, she realized it was her reflection and she says that was the first time she had seen herself in years. This shows how identity loss was a defining characteristic during the Holocaust.”
“When people were sent to concentration camps to do forced labor, they were tattooed with codes on their arms and shaven bald, which is like having their identity taken away because they are now just numbers, not humans,” Leyna added. 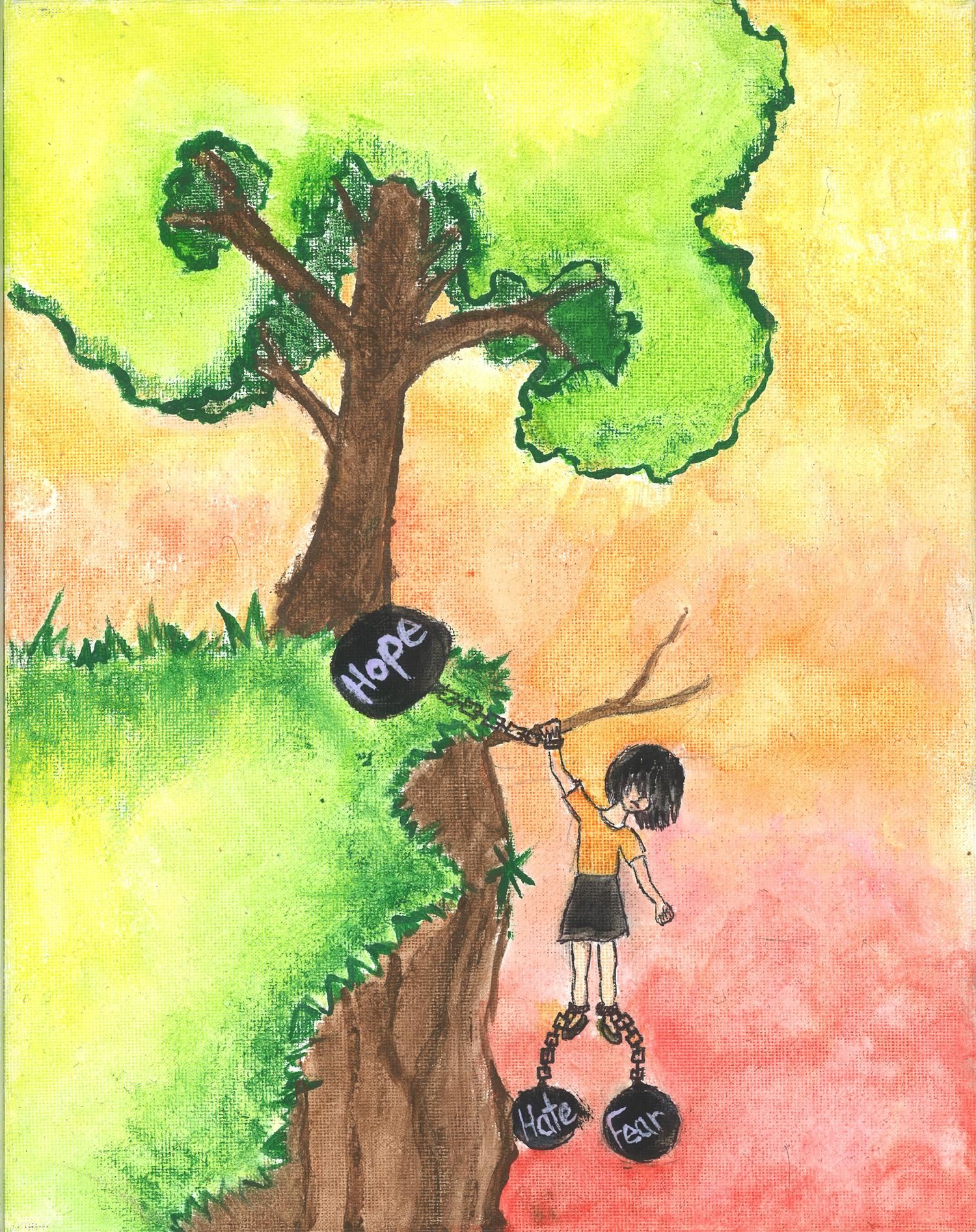 Also in the same category, Amina Ali, and eighth grade student at Meeker, earned an honorable mention with her piece about Stella DeLeon.

“My piece of art represents how hope was the only thing that kept most Jews going,” she said. “It represents how fear and hate are constantly weighing down on them and eventually makes them break. Hope is their beacon of light, their reassurance that after a sunset there will be another sunrise. That they will survive and grow up just like the tree that they see outside of their window.”

In the seventh and eighth grade writing category, eighth grade student Abdullah Majeed earned an honorable mention for his piece about Henry Friedman.

“By the age of ten, he already began to experience hateful comments,” he wrote ‘“Wait ‘til Hitler comes for you all. He’ll take care of you!” At 14 years old, he went into hiding with his mother, brother and a teacher, they were forced to hide for their lives...” Read his entire essay on the Holocaust Center’s website.

Congratulations to these students for their incredible accomplishments!