A Throw to Win it All

For Saydi Orange, track and field has been something she has known for quite a while. “I started track in fifth grade at Ridgewood Elementary School. I did the softball throws, and I was good at that,” said Orange. Throughout her elementary and middle school track 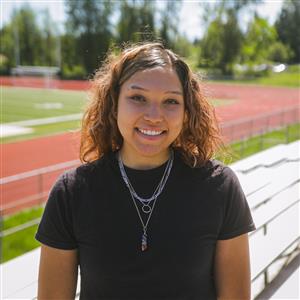 careers, she slowly started to find a skillset for throwing the javelin and started working with Keith Eager at the Tahoma Track Club, where she would practice yearly before the high school track season. According to worldathletics.org, the governing body of track and field worldwide, javelin is “a throwing event in which athletes throw a metal-tipped javelin as far as possible. It requires a combination of strength, power, timing, co-ordination precision, and timing.”

The skillset to throw a javelin as far as possible requires a lot of different elements. However, that skillset was a bar that wasn’t too high to clear for Orange, as she was able to win the WIAA 4A Track and Field Championship in women’s javelin with a throw of 153 feet 9 inches. Orange is also ranked third in the nation with a throw of 157 feet. In addition to winning the state championship in javelin, she also placed 6th in the women’s shot put at the state championship event.

A lot goes into these throws, but Orange has got it down from preparation to the final throw. “I try to clear my mind, trust myself, and trust my training. I train hard outside of competition, and I try to stay as confident as possible and just do my thing,” said Orange. The javelin competition brought many challenges, one of which was wind and rain. The weather elements affected how throwers approached the event, and for Orange, it was in the back of her mind each throw. “At that point, I wasn’t doing well because of the rain and the wind, so I was a little frustrated,” she said. However, the winning throw was where all her training and hard work came onto the stage. After talking to her coach, she readjusted to throw the javelin lower so the wind wouldn’t carry off the javelin. “I knew I hit it because it went the angle it was supposed to, and the wind didn’t push it back like it was doing for the other throws,” said Orange. “I was excited because I knew it was far, and it was something that could put me in first place and stay there.”

Orange is currently a senior graduating from Kentridge High School this Saturday. She now has two full-ride scholarship offers to Washington State University and the University of Nebraska to continue her fantastic track and field career. Congratulations to Saydi Orange, our state champion!

KSD Excellence at the WIAA 4A State Championship Meet