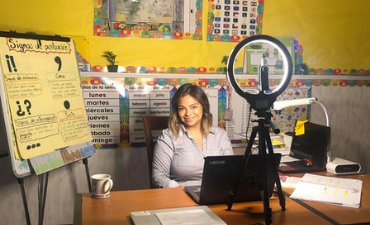 Spanish is a global power language with more speakers worldwide than English. Other than English, Spanish is the most widely spoken of the more than 138 languages represented within our Kent School District (KSD) community, which is one of the most linguistically diverse school districts in the country.

One way that our district grows and develops the assets of bilingualism and multilingualism is through our Dual Language program. Our 50/50 Two-Way Spanish/English program currently serves nearly 1,000 emergent bilingual students in Kindergarten through eighth grade at Carriage Crest, Kent, and Neely-O'Brien elementary schools, Kent Valley Early Learning Center, and Mill Creek Middle School.

Our Dual Language program has been serving students for eight years and is planned to continue through twelfth grade. Our students are on their way to becoming fully bilingual, biliterate, and culturally aware global citizens who will graduate ready for post-secondary, careers, and life in either or both languages.

Many adults who attended US secondary schools learned Spanish in middle and/or high school were taught using a grammar-based approach which focused on verb conjugation, conversational language, and memorization. Language is not acquired in this manner; rather, students learn about the language as opposed to learning academic content in the language. Dual Language students are not only becoming both conversationally and academically fluent (meaning that they can do their jobs, from student to architect to chef – any profession) in both languages, but they are also developing the proper accents and inflections unique to both languages.

It is critical to develop these facets of language early. As humans age, they lose their ability to produce additional language sounds. A good example is rolling R in Spanish. Students who acquire Spanish starting in grade K will develop this ability in addition to sounds produced in the other languages they already speak.

How Can Students Enroll in the Dual Language Program?

Learn more about our Spanish/English Dual Language program and how students can join.