Be The Change You Wish to See in This World 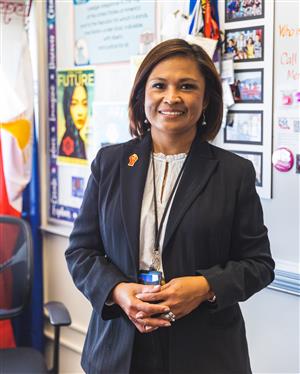 Dr. Marissa Winmill started teaching over 20 years ago and has impacted her students’ education countlessly. However, she never thought that she would be teaching. “[I wanted] to wear a suit and have a suitcase … I thought I would be a lawyer or a dentist,” said Winmill. Winmill knew that she wanted to impact her community but did not know what she excelled at. When she found teaching, she realized it was the career for her. “When I became a teacher, I felt I was called to do this … this was my mission.”

Dr. Winmill grew up in the Philippines and attended college there. She originally wanted to be a math major and excelled at learning and teaching it. However, there was no math major at her school, and the secondary education program only offered English as a major. Shortly after her schooling, Dr. Winmill realized that she was ready for a bigger world. “I applied for a job in the U.S., and nobody in my family is in the U.S.,” said Winmill. “I [was] ready to explore the world … I sent my brothers and sisters to college for ten years, and everything I worked for went back to my family, and now I told myself it’s my turn.”

Dr. Winmill got a job in the U.S. as a reading specialist in Texas. “I was kind of nervous … but I told myself, ‘I’m courageous enough, I’m bold enough, I can do this',” she said. Dr. Winmill met her husband, got married, and then moved to Washington State, where he was from. Her husband is also a teacher, and she calls her and her husband “super teachers.” She came to Washington, thinking she would do business, but became a teacher at Evergreen High School, where she taught for three years. She moved to teach at Mount Rainier High School, and during this time, she earned her National Board Certification. 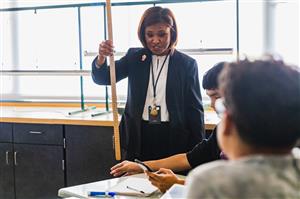 world … I want my students to see that they can count on me anytime.” Dr. Winmill recalls a refugee student from Iraq who almost dropped out. She remembers becoming emotional and telling this student, “No, you are not dropping out. I know your dreams and your aspirations; you will continue to pursue your dreams.” This student went on to finish their schooling and become a nurse. This is the type of impact Dr. Winmill has on her students. She sees the best in them, even when they do not see it in themselves.

Dr. Winmill knows how challenging teaching can be but encourages those seeking to be teachers to “continue following your heart on why you want to do it. To become a teacher, you need to know your ‘why,’ … teaching is about empowering others, helping students reach their full potential, and you can’t be a teacher if you don’t have that in your heart,” she said. “If you want your students to be lifelong learners, you need to show them.” Dr. Winmill lives by these words, having recently received her Doctorate in Education in July of this year.

Throughout her journey, Dr. Winmill never stops looking at ways to help her students in the classroom and beyond. Her influence is significant in the lives of students she has taught during her career. She hopes her students can enter the world and be difference makers. “I want them to know that they are the change, and all of them have the assets, the strength, and the power to transform their communities,” she said. 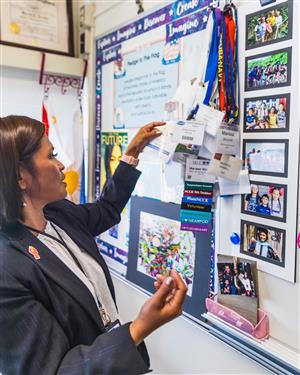 Dr. Winmill has received numerous awards and accolades, and she hangs each one of them up in her classroom. She hangs these awards not to boast but to showcase to students that they can also achieve anything they set their minds on. Dr. Winmill’s mantra is “be the change that you wish to see in this world.” She has been changing our world and inspires a new generation to do the same.